When looking at certain football managers or even being a young coach working at grassroots football. A common question that is asked of managers and coaches is: What is your philosophy? Philosophy’ has become a buzz word in the world of modern-day football management. Being said to possess one carries an intellectual air about it; the phrase ‘we won’t compromise our principles’ routinely met with nods of approbation. When viewing one’s philosophy one has to check whether or not the philosophy is pragmatic. The Oxford English Dictionary lists pragmatism as ‘dealing with things sensibly and realistically in a way that is based on practical rather than theoretical considerations’. Being pragmatic in football suggests a dull, safety-first style of play in an effort to play the “right way”.

When thinking about asymmetrical tactics, my thinking goes back to Fabio Capello’s time as England’s national team manager. Is there would be one way to describe Capello it would be pragmatic. During his tenure, England’s lack of left-wingers was seemingly their weakness. Capello, like myself, protests against such designations as 4-4-2 or 4-2-3-1 etc. Tactical numbers such as 4-4-2, 4-2-3-1 are useful, but crude essentially, they are tools to give a general idea of shape, more relevant to those analysing the game. To insist that a team playing what we, for example, call 4-2-3-1, must have a winger on each side is a rather presumptuous description. Just because a certain way of playing doesn't conveniently fit any default template does not diminish it; in fact, if anything, it may give it greater validity by making it harder to combat. That, really, is the advantage of asymmetry; it presents sides with unfamiliar and unpredictable problems.

Other cultures seem to have a far richer vocabulary with which to describe players, which in turn perhaps leads to greater tactical sophistication as it becomes immediately apparent that setting up a team is not about slotting players into a position with the aim of making a specific tactical shape. Capello was not hindered by the dogma that players must play in their best positions, because did not see them as simply positions.

Steven Gerrard was usually the one that fans described as shunted out on the left-wing. The thought that Steven Gerrard must play in his natural position through the middle was not a hindrance to Capello as Gerrard was less a central midfielder but a bundle of attributes. It could possibly have been the use of Gerrard out of left that saw the resurgence of inverted wingers. Playing him to the left of Rooney allowed Gerrard to cut in on to his stronger right foot. The attacking width on the left was more provided by Ashley Cole with Frank Lampard sitting deeper covering the deeper left-centre positions and Gareth Barry providing to be a midfield blocker with Walcott adding orthodox width on the right.

Take all this into account, England had a diverse range of options from the left that built into a balanced asymmetrical style of play.

Let's be honest though, the system used by Capello was not the best. Whilst he was manager of England, the national team weren't overly successful. The manager that has been very successful with asymmetrical tactics is Pep Guardiola. Pep, like all managers has his own playing style and has been known to stick to his principles. Despite of this Guardiola is is actually quite dynamic in the way he sets his teams up. Pep Guardiola has been a tactical mastermind that sets his team up based on his own personnel and the opposition.

Pep was the manager that utilised the False 9 role to its maximum strength. Granted he had one of the best player to grace footballing pitch, Messi playing the role did help but it was this role that got people talking about atypical formations.

"I remember that it was a surprise for me, because I was called up the day before the game, was made to go to Guardiola’s office at the Ciutat Esportiva, and I was told that he had been watching Madrid’s games a lot, as he did with every opponent. He had been talking with Tito Vilanova and they had thought about me playing as a false nine. He was going to put Samuel and Thierry Henry on the outside, and I was going to play as the false centre forward. I wasn’t going to stay there, but rather come out and join up with the central midfield. The idea was that Madrid’s centre backs would follow me out, and the two fast wingers that we had would go around the back. In fact, one of Henry’s goals was like that. It was a surprise for us and for Madrid. I remember that we had a lot of possession, and we always had an extra man in the middle of the park. I’d never played as a centre forward, but I knew that position because it meant coming through from deep to get forward, without being a static number 9. It wasn’t a big change for me. I’d been playing on the outside for years, and so I knew what that position was about."

Peps tactical systems are tweaked constantly with the aim of getting the best out of his players. Pep often uses asymmetrical and atypical formations/setups to accentuate strengths.

Pep uses many forms of atypical formations, showing that his teams use what Football Manager would phrase as a fluid formation. As Barcelona we saw Dani Alves playing as a winger with Eric Abidal taking up more of a centre-back role which allowed for consistent overloads on the right side of the pitch in an asymmetrical style. This trend continued throughout his time at Barcelona as can be seen in the picture below from zonalmarking.net

When pep joined Bayern Munich, he took his asymmetrical philosophy with him. At Bayern and Man City Pep introduced the world to Inverted Wing Backs. Before Pep, Bayern struggled with ball circulation and one on one defending in counter-press situations. By instructing the the full-back to drift centrally ball circulation was much easier as players were much closer together which also allowed the team to press when required.

The use of inverted wingers despite playing in the central areas of the pitch does help maximise the team's other players. At Bayern and City Pep has deployed Inverted Wing Backs alongside wingers that provide the natural width which for players that are naturally good at direct dribbling from wide positions is a massive strength (here we are talking about Inverted Wingers)

Many asymmetrical are linked to possessions based football given that the teams are usually compact to allow for short passes - this clearly shows an advantages for these systems when in-possession. But what about out of possession?

I hope that by reading this I have given you a fresh perspective on my view of asymmetrical and that I have enabled you to broaden your mindset when it comes to creating your own tactics on Football Manager.

As always, I value your opinions and look forward to hearing your thoughts 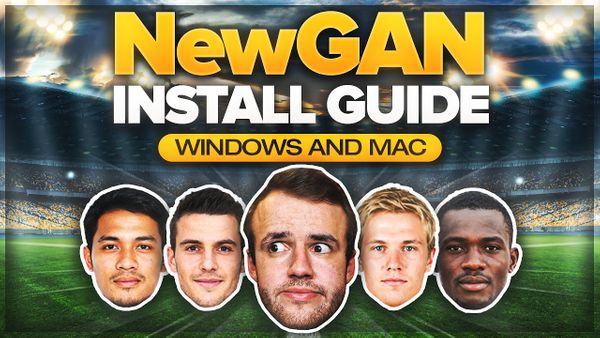 An easy-to-follow installation guide for the SAGKRZealand Facepack. 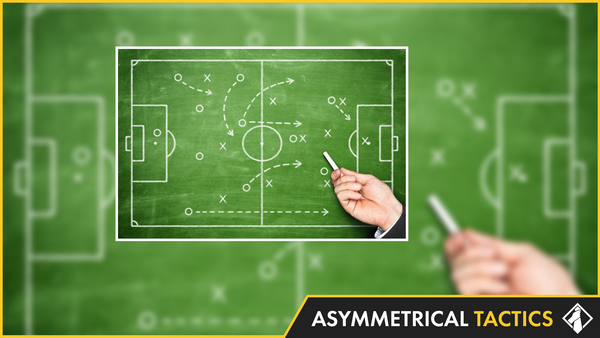 Asymmetrical tactics on FM are used infrequently on Football Manager. In this article, our very own FM Teacher discusses their use.