Stefano Okaka is probably a name you’ve heard before, perhaps for his potential in his early days or for being a uninspiring potential transfer for Everton 4 years ago. This Italian born striker was predicted to grow into an amazing striker back in FM06/07, along with the likes of Freddy Adu, however, plagued with injuries and lack of opportunity Okaka never lived up to expectations.

Born to Nigerian parents in Italy, Okaka joined the Roma youth system in 2004 at the age of 15. The aspiring striker showed great potential and ended up being part of the team that won the U-20 national title in 2005, scoring against Juventus in the semi-final and Atlanta in the final. Okaka was given the opportunity to show his skill on this large stage and certainly didn’t disappoint.

In September 2005, at the tender age of 16 years, Okaka was given his chance to debut with the first team in the UEFA Cup against Aris. This made Okaka the youngest footballer to debut in an international competition for an Italian team. Later that year the young Italian scored his first goal for Roma in the Coppa Italia against Napoli in December. Okaka was praised for his strong midfield run and excellent sharp shot at the goal to the side of the goal keeper. This goal made him the youngest goal scorer in the competition. His Serie A debut came a month later in a 1-1 away draw with Sampdoria.

Okaka scored his first Serie A goal when he came on as a substitute for Francesso Totti in September 2006 in what would be a 3-1 win over Siena, shortly after his 17th birthday. Ten days later, Okaka debuted in the UEFA Champions League in what ended as a 2-1 away loss to Valencia. Following the loss, Okaka was loaned out to Serie B team Modena for the 2007/08 season to obtain first team experience. Okaka scored 7 times in 33 appearances for Modena before he returned to Roma for a new contract lasting until June 2012.

In August 2009, Okaka came on as a substitute and scored his first goal for Roma in a continental competition in a 7-1 away win in the second leg of the 2009/10 UEFA Europa League before going onto score again in Roma’s 2-0 win over CSKA Sofia and Roma’s 2-1 win over Fulham.

In February 2010 Okaka was loaned out to Fulham until the end of the season, after impressing Fulham with his performance during the Europa League. He made his debut in a 1-0 win over Portsmouth and scooped up his first club goal for Fulham in a 5th round FA Cup tie at home to Notts County. Okaka obtained his first league goal for Fulham against Wigan Athletic in April with a 2-1 win at Craven Cottage. After his loan at Fulham ended, Okaka was sent back out on loan in January 2011 to Bari where he scored his first goal for the club in a 1-0 win against Lecce. Okaka picked up a total of 10 appearances and 2 goals for Bari before he sustained an injury in round 30 and missed the remainder of the season.

Okaka seemed to be a low priority at Roma upon his return and the arrival of Bojan from Barcelona. In September 2011 Okaka’s agent revealed Giampiero Pocetta "It is up to the boy to decide but it seems that there is no room for him according to coach Luis Enrique,". Pocetta went onto also say "If things do not change soon then we will seek a solution. Okaka is a striker of interest to Italian and English clubs and we will make a decision in January."

No changes happened and Okaka had no appearances for Roma in the first half of the season leading to Okaka going on loan to Parma in January 2012 until the end of the season in the hope of play time. Okaka picked up his first Parma goal in March scoring against Fiorentina in a 2-2 draw. Okaka finally got play time and made 14 appearances whilst on loan and secured 3 goals for the club. Impressed with the young strikers performance, Okaka was offered to sign a permanent deal in August 2012. The day after signing however, Okaka was sent out on loan straight away to Serie B club, Spezia in order to get play time. The young Italian gained 38 appearances, 7 goals and 6 assists, before returning to Parma for the 2013-14 season.

Okaka was never first choice and seemed to full short at every opportunity, this left Okaka only making 2 Serie A match appearances for Parma and even then that was as a substitute each time. This once highly touted player was not living up to expectations.

In January 2014 Okaka signed a permanent deal with Seria A club Sampdoria where Okaka made 13 appearances and scored 5 goals in the 2013-14 season. However the strikers time at Sampdoria was to be short lived as in 2015 club owner and president, Massimo Ferro informed Italian media that Okaka would be leaving the club. Okaka’s club exit came in the form of a move to Anderlecht, a Belgium team, in July 2015 for a reported fee of  €3 million. During the 2015-16 season, Okaka had 37 appearances for Anderlecht and scored 15 goals. Yet again this new move wasn’t to be and despite his performance, Okaka ended up signing a 5 year deal with Watford in August 2016.

Okaka’s bad luck continued and on the back of Watford manager, Walter Mazzarri, leaving in Okaka’s second season he went from being a first option to being played as a substitute. During the 2016-17 season, Okaka picked up several injuries leaving him to miss 17 games. Okaka only gained a total of 47 play minutes for Watford in 3 substitute appearances and was subsequently sent out on loan to Udinese in January 2019 for the rest of the Serie A season.

In September 2019 Okaka signed a three year deal with Udinese to make the move permanent. This 3 year deal was cut short as Okaka ended up signing with Istanbul Basaksehir FK in Setember 2021, a year before his  contract with Udinese was set to end. Udinese wrote a statement regarding Okaka’s departure “With his leadership and his technical and human qualities, Stefano has contributed to the achievement of targets for the club. From everyone at Udinese, we send the best wishes and a big thank you for what he has done wearing and sweating in the Bianconeri shirt.”

Okaka currently resides at Istanbul Basakeshir FK but the question is for how long. This Italian striker has bounced around from club to club so is no stranger to starting over. He was much loved in his early days, by Football Manager players and football fans, but as time has come to pass, peoples love for Okaka has slipped away.

From Football Manager 2014, Okaka was noted as unlikely to improve even with time and training and from Football Manager 2015 he was declared injury prone, making him a reluctant choice for budding managers. His FM career and real world career reflected one another very closely, leading to much disappointment. Perhaps this former wonderkid had unrealistic expectations placed on him that he would never be able to live up to. 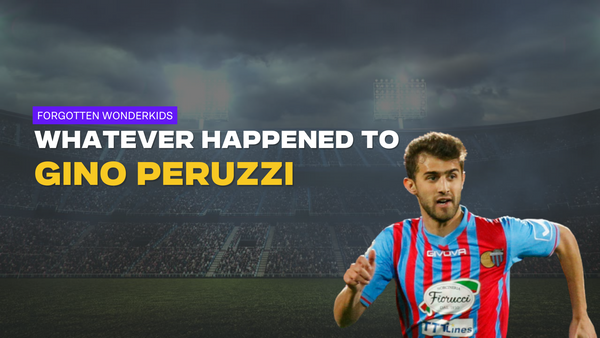 When you think of Football Manager 13, the name Gino Peruzzi will probably come to mind. This young Argentinian had so much talent and skill that he created much excitement among Football Manager players, allowing him to nab the title of the best right back in the game by those who loved him.